Big profile of @Pmarca in The New Yorker last weekend:

“…I’ve been totally determined to be on the other side of that dynamic by being here, because success in software follows a power-law distribution. It’s not Coke and Pepsi and a bunch of others; it’s winner take all. Second prize is a set of steak knives, and third prize is you’re fired.”  – Marc Andreessen 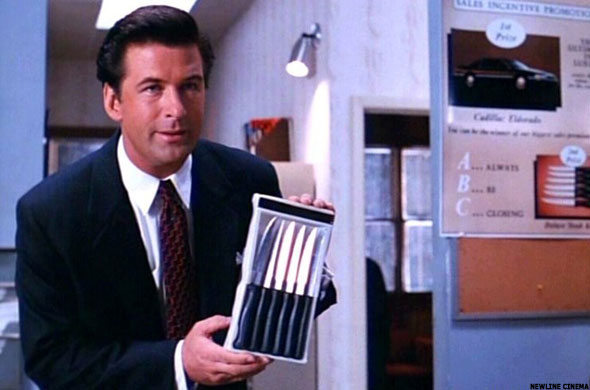 Every company is becoming a tech/software company these days. What people are ignoring is that software markets have a tendency to become winner-take-all or winner-takes-most markets. Traditional Michael Porter style “competing” doesn’t necessarily transfer.

Note:  This is the second in a series on the application of the Cynefin decision-making framework to the field of competitive intelligence.  Part I is available here.

We last left off with the introduction to Cynefin. To review, Cynefin is a framework based on complexity science and designed to help decision makers understand where their system stands in the external environment. This context allows not only for better decision-making, but also to avoid problems that arise when a management style is used outside of appropriate context.

As Cynefin’s creator – Dave Snowden – described it in the Harvard Business Review:

“The framework sorts the issues facing leaders into five contexts defined by the nature of the relationship between cause and effect. Four of these – simple, complicated, complex, and chaotic – require leaders to diagnose situations and to act in contextually appropriate ways. The fifth – disorder – applies when it is unclear which of the other four contexts is predominant.”

(For the sake of brevity here I encourage you, dear reader, to explore Cynefin yourself with the suggested resources appended to Part I of the series.)

Credit for the Graphic goes to Goal Systems International.

If we were to match the utility of existing competitive intelligence practice and methodology to the Cynefin domains, we would see that CI is very useful in the ordered domains (simple and complicated), where causation is perceptible. However, in the un-ordered domains (complex and chaotic), where causation is less perceptible – CI would have substantially less utility.

After all, how can you develop KITs and KIQs if you don’t know what you don’t know? Lexis-Nexis does not have a premium subscription for the unknowable.

This lack of utility in the complex and chaotic domains presents a problem for CI.

Because much of the business world over that last 30 years has shifted from complicated systems to complex systems – that is, to the un-ordered side of the spectrum in the Cynefin domains.

As Gokce Sargut and Rita Gunther McGrath wrote in the September 2011 issue of HBR:

“complexity has gone from something found mainly in large systems, such as cities, to something that affects almost everything we touch: the products we design, the jobs we do every day, and the organizations we oversee.”

Facilitated by a revolution in information technology, systems that were once separated are now interdependent, and thus by definition – more complex. The result, as Sargut and McGrath write, is that:

Making matters worse, our analytic tools haven’t kept up. Collectively we know a good deal about how to navigate complexity—but that knowledge hasn’t permeated the thinking of most of today’s executives or the business schools that teach tomorrow’s managers.”

Emphasis on “our analytic tools haven’t kept up.”

Managing everything as is if it were simple would be ineffective, and managing everything as if it were complex would be inefficient. Cynefin is not a unified field theory or holy grail of anything – but it does provide a useful framework to put the pieces together in ways that will help to compare, make-sense of, and guide us in the selection and development of CI methodologies.

Coming Up – intelligence and strategy in a complex environment; and the complex adaptive organization.

Note: This is the first in a series of posts introducing the Cynefin decision-making framework to the field of competitive intelligence. The Cynefin framework will serve as a thread between subjects this blog intends to explore, including: sense-making, complexity, strategy, and modern intelligence methodologies.

Competitive Intelligence tends to treat all decision making enviroments as the same, regardless of the system it occurs in. This is a mistake because the system or environment the decision making occurs in differs from situation-to-situation and industry-to-industry.

Part of this disconnect is because the CI field was developed on Cold War era intelligence paradigms that were imported, nearly unchanged, from the government and designed for largely static issues and environment. While the US intelligence community broadened its to dynamic topics after the fall of the Berlin Wall, the CI field has not adapted its paradigms to better suit the external environment.

There are 5 domains or contexts in the Cynefin framework: simple, complicated, complex, chaotic, and disorder and is to be visualized as shown here below: 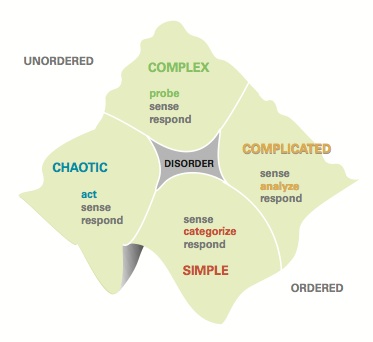 The first four domains can be described as follows:

Simple – Clear and obvious relationship between cause and effect. Known-knowns. Approach with Sense–Categorize–Respond and apply “best practices”.

Complex – Cause and effect can only be perceived in retrospect, not in advance.  Unknown-unknowns.  Approach with Probe–Sense–Respond to detect emergence patterns and practices.

Chaotic – No relationship between cause and effect on the systems level. Unknown-unknowable.  Approach with Act–Sense–Respond to discover novelty, seek to stabilize environment.

The fifth domain is disorder and abuts all the other domains. This is to signify that any given domain can slip easily into disorder, when not knowing what what type of causality exists and people revert back to their entrained thinking for decision making.

It is important to note that Cynefin is not a categorization model – this is not a simple B-school 2×2 matrix.  Problems can overlap boundaries, and the lines between boundaries blur.

Future posts in this series will further explore Cynefin and its applications to CI.