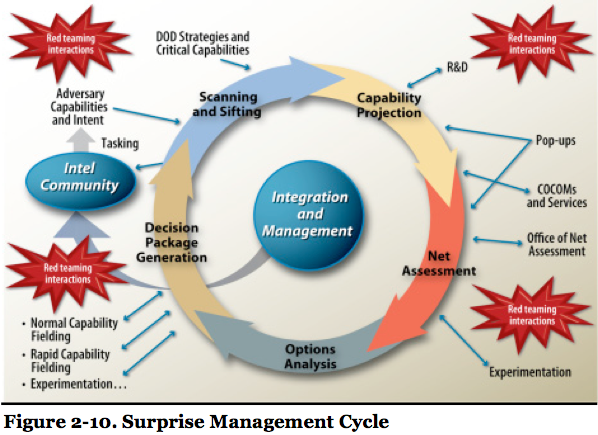 Keren Elazari at TED – “Why we Need Hackers”

“For the past three decades, hackers have done a lot of things, but they have also impacted civil liberties, innovation and Internet freedom, so I think it’s time we take a good look at how we choose to portray them, because if we keep expecting them to be the bad guys, how can they be the heroes too? My years in the hacker world have made me realize both the problem and the beauty about hackers: They just can’t see something broken in the world and leave it be. They are compelled to either exploit it or try and change it, and so they find the vulnerable aspects in our rapidly changing world. They make us, they force us to fix things or demand something better, and I think we need them to do just that, because after all, it is not information that wants to be free, it’s us.”

The Process of Effective Organizational Adaptation

Vendors in the News

Billionaire rockstar tech-investor Peter Thiel is making the media rounds in promotion of his new book Zero to One: Notes on Startups, or How to Build the Future. Thiel was a cofounder of PayPal and Palantir, in addition to being the first outside investor in Facebook. An outspoken libertarian, Thiel has courted controversy for his political and philanthropic activities; most recently, Thiel has been widely identified as the inspiration for the Peter Gregory character on HBO’s hit sitcom Silicon Valley.

This week The Wall Street Journal published an adaption from Thiel’s new book in an oped titled “Competition is for Losers”, Thiel closes with:

So why are economists obsessed with competition as an ideal state? It is a relic of history. Economists copied their mathematics from the work of 19th-century physicists: They see individuals and businesses as interchangeable atoms, not as unique creators. Their theories describe an equilibrium state of perfect competition because that is what’s easy to model, not because it represents the best of business. But the long-run equilibrium predicted by 19th-century physics was a state in which all energy is evenly distributed and everything comes to rest—also known as the heat death of the universe. Whatever your views on thermodynamics, it is a powerful metaphor. In business, equilibrium means stasis, and stasis means death. If your industry is in a competitive equilibrium, the death of your business won’t matter to the world; some other undifferentiated competitor will always be ready to take your place.

Perfect equilibrium may describe the void that is most of the universe. It may even characterize many businesses. But every new creation takes place far from equilibrium. In the real world outside economic theory, every business is successful exactly to the extent that it does something others cannot. Monopoly is therefore not a pathology or an exception. Monopoly is the condition of every successful business.

Tolstoy famously opens “Anna Karenina” by observing: “All happy families are alike; each unhappy family is unhappy in its own way.” Business is the opposite. All happy companies are different: Each one earns a monopoly by solving a unique problem. All failed companies are the same: They failed to escape competition.

As with everything he writes, the essay is thought provoking.

“Entrepreneurship is the launching of surprises. The process of wealth creation is offensive to levelers and planners because it yields mountains of new wealth in ways that could not possibly be planned. But unpredictability is fundamental to free human enterprise. It defies every econometric model and socialist scheme. It makes no sense to most professors, who attain their positions by the systematic acquisition of credentials pleasing to the establishment above them. Creativity cannot be planned because it is defined by information measured as surprise. Leading entrepreneurs—from Sam Walton to Larry Page to Mark Zuckerberg—did not ascend a hierarchy; they created a new one. They did not climb to the top of anything. They were pushed to the top by their own success. They did not capture the pinnacle; they became it.”